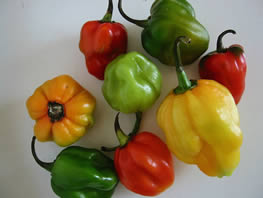 The heart of every hot sauce is the chili pepper… and each one has it’s own unique style.  A unique smell, taste, and heat level that adds to the flavor of the various hot sauces it’s used in.

Some advanced hot sauces are starting to combine chili peppers – like blending a fine wine – to achieve some out of the world flavor combinations.

Here’s a quick primer on over 60 different chili peppers found throughout the world.

2.  Aji Pepper – A hot reddish orange pepper is used in sauces and often swapped with Habanero peppers.  Used Frequently in Peruvian cuisine.  The chili pepper has a slightly fruity flavor.

4.  Anaheim Pepper – Having a smooth waxy dark green skin, the Anaheim is mild and used roasted, stuffed, or (red ripe and dried) ground into a powder. 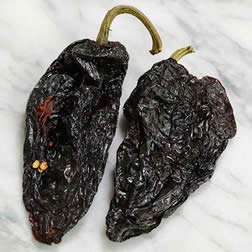 5.  Ancho Chili Pepper – This is the dried version of a Poblano Chili Pepper.  It tastes of chocolate, tobacco, and berries

6.  Bahama Mama Pepper – Another name for the Habanero pepper.

8.  Bell Pepper – Large bulbous green pepper with no heat but a fruity taste.

11.  Cascabel Pepper – Often this pepper is dried, turning into a reddish brown sphere the size of a walnut.  The seeds come loose after drying and sound like a bell when shaken.  This gives it it’s other name- Jingle Bell Pepper. 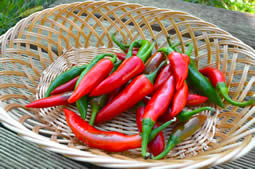 13.  Cherry Pepper – An orange or red chili pepper is the size of a cherry and is often red.

14.  Chiltepe Pepper – An orange red chili that is often dried and used in place of Cayenne.

17.  Chiltecpin Pepper – A Tiny pepper that’s orange or red in color packs quite a punch.  The fresh and dried versions are used to season beans and stews.  The heat is fast fading.  The Chili Peppers also go by the name Chiltepin Pepper, Tepin Pepper, Bird Pepper, and Chile Bravo pepper

18.  Chipotle Pepper – Ripe, red Jalapenos that are smoked with Pecan or fruit woods to add a depth of flavor.  Sometimes the chipotle peppers are dried and ground for storage. The smoked Chipotle can be found in a jar or tin, packaged in Adobo sauce.

19.  Chile de árbol – Found in Mexico, the pepper is thin.  A known as bird’s beak chile and rat’s tail chile.

20.  Congo Pepper – Another name for the Habanero pepper.

21.  Datil Pepper – Another name for the Habanero pepper.

22.  de Arbol Pepper – Another name for the Cayenne Pepper.

26.  Ginnie Pepper – Another name for the Cayenne Pepper.

27.  Guajillo Pepper – The dried ground version of the Mirasol Pepper.

30.  Habanero Peppers – Habanero peppers come in colors ranging from green to yellow, orange and red.  They have a fruity aroma that goes well with sauces and fruits.  Also called the Congo Pepper, Bahama Mama Pepper, and Datil Pepper.

33.  Isleta Pueblo Chile Pepper  – Turns dark red as it matures and has a fruity sweet flavor.

34.  Jalapeño Peppers – Jalapeno peppers are the most popular pepper in the world, with all others being measured against its near perfect heat to flavor ratio!  Jalapenos are used in green sauces.  These Red Jalapenos are often smoked and sold as Chipotle peppers 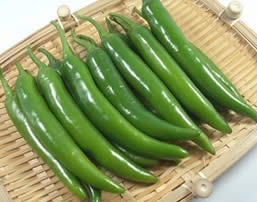 38.  Macho Pepper – Is a small red pepper that packs a punch, similar in heat to a Habanero, but with less flavor.

39.  Manzana Pepper – This pepper is known for having black seeds, and the outer color ranges across the spectrum from green to yellow, orange, and red.  The heat is similar to the Habanero.  The pepper is often eaten in fresh salsas, and found in Peru.  Also called Rocoto Pepper.

40.  Mirasol Pepper – Is a Woody tasting pepper with a slight acidity.  When dried and ground it’s called Guajillo pepper.

41.  Mora Pepper –  The Mora Pepper is a smoked Jalapeno Pepper but deep red in color.  Often smoked over mesquite flavors.

44.  Naga Bhut Jolokia – The pepper HOT, HOT, HOT.  In 2007 is held the world record, only to be recently superseded by the Trinidad Moruga Scorpion in 2011.   The pepper also goes by the name Bhut Jolokia, ghost pepper, ghost chili pepper, red naga chili, and ghost chili.

45.  Padron Pepper – Mild Spanish pepper often grilled and eaten as a side dish.

47.  Pequin Pepper – a small bright red pepper, they have a citrus aftertaste.  Often found in Peru.

48.  Peter Pepper – An ornamental pepper with a creative and “interesting” shape.

49.  Pimento Pepper – The Pimento is a large pepper with a taste similar to a red bell pepper.  It’s often used as a fresh garnish, stuffed into olives, or dried and ground as paprika.

50.  Piri Piri Pepper – This Pepper grows robustly in South Africa, and is small, about half to one inch in length.  Similar in size to a habanero pepper it’s rated at 175,000 on the scoville scale.  The pepper has a citrus-herbal flavor, and is often blended with other ingredients.  Sometimes the pepper is called a African Bird’s Eye pepper or Pili-Pili pepper. 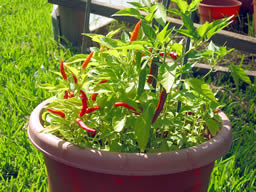 51.  Pili Pili Pepper – Another name for the Piri Piri Pepper.

53.  Poblano Pepper – The poblano pepper is a dark green pepper about the size of your hand.  As it matures it starts to turn a red color.  The pepper is often stuffed with cheese and fried in many mexican restaurants.  When the Poblano Pepper is dried, it is called an Ancho Chili.

56.  Rocotillo Pepper – The Rocotillo is bright red but often has a fraction of the heat.  The pepper has a fruity, sweet taste, and is often eaten out of hand.

57.  Rocoto Pepper – Another name for the Manzana Pepper

59.  Scotch Bonnet Pepper – Found in Jamaica – and many Jamaican hot sauces – Scotch Bonnet Peppers are hot like the Habanero.  Little know fact, the Pepper looks like a Scotsman’s bonnet (giving it the name!).  The pepper has a fruity-ness and often is included along with fruit based hot sauces.

60.  Serrano Pepper – These peppers are bright green and bright red.  Despite their good looks, they don’t have much substance.  They are great for adding heat, but don’t bring many flavors otherwise.

62.  Tabasco Pepper – The famous pepper that makes the famous Tabasco hot sauce.  It provides a good level of heat and a light vegetable and earthy flavor.

64.  Thai Pepper – These green and red peppers are known to be filled with oils that coat the mouth for a lasting heat.  Some cooks recommend substituting 3 or 4 serrano peppers for one Thai pepper

65.  Trinidad Moruga Scorpion Pepper – This scary sounding pepper packs a punch as scary as it’s name.  The pepper is about the size of a golf ball, and is reported to have a fruity flavor.  At a Scoville rating of over 2 million, I don’t think I’ll be biting one any time soon.

If you see any we forgot to mention, just shoot us an email and we’ll get it on the list!

Check us out on social media for more hot sauce reviews, recipes and more! 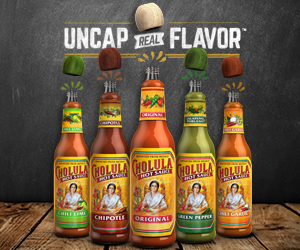